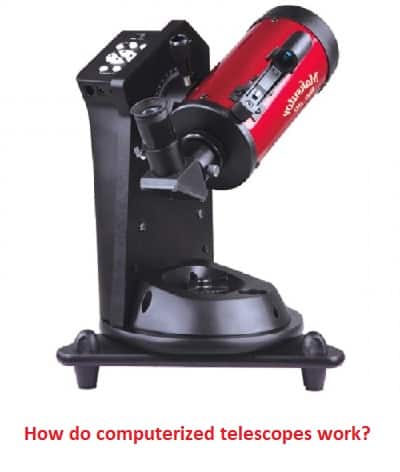 How do computerized telescopes work? They store information about where the stars should be in the sky at a particular date, time of night, and location in the world. If you are currently looking at Jupiter and want to look at Neptune instead, a GoTo telescope should know precisely how much to change the angle of the telescope to point at Neptune. The stars move in predictable patterns. Therefore, the date, time, and place is enough information for the computer to know where any star is relative to any other.

Computerized telescopes have been around since the 1980s and have been improving steadily in the decades since then. With an analog telescope, it is difficult for an amateur to find a star. It is challenging to learn how to find objects using star charts.

With an automated telescope, you will not have to know how to calculate where a star will be in the sky at the current date at your current location. The telescope makes amateur astronomy an accessible hobby that does not require anyone to learn a lot of math for astronomical calculations.

How to set a telescope in polar alignment

Using a computerized telescope is not usually as typing in a word and having your telescope point towards Neptune. Instead, you must first manually point the telescope at a certain point in the sky, such as the north star. The computer then uses the north star as a reference point to find the other constellations in the night sky.

After you set the reference point, the computer knows how far to move the telescope to point from the north star to Saturn or Neptune or any other planet or star. A computerized telescope can store an enormous amount of information about the location of different celestial objects. The computer knows where tens of thousands of objects are. Digital telescopes are also known as GoTo telescopes because they can automatically go from a reference point to any location in the night sky.

If the computer knows what time of the night it is, its location, and where the north star is, it can mathematically calculate where other stats are. It does not include scanning technology that can look at a group of stars in the sky and figure out where other objects are relative to it.

Using a GoTo telescope is not tricky, but it does take some practice. You may have trouble with your first try. After you have used a GoTo telescope a few times, it is easy to use the technology. GoTo telescopes are reasonably user-friendly devices.​

How does telescope tracking work

Computerized telescopes are also capable of tracking objects as they move through the night sky. As the earth turns, the stars seem to move. If you point an analog telescope at a star and then leave the telescope fixed in place, the star will quickly move out of view.

With an analog telescope, you have to move the telescope yourself to keep the star in your eyepiece. A GoTo telescope, on the other hand, can automatically follow the star's movement. You can, therefore, walk away from an automated telescope without the object moving out of view.

Again, this does not involve image scanning technology. The computer does not watch the object and use the motor to keep in in view. Instead, it uses precise knowledge of where the celestial body should be and astronomical calculations to follow the object.

Automatic tracking makes it vastly easier to observe objects. The farther away an object is, the faster it seems to move out of the field of view. If you are looking at a distant enough star with enough magnification, it may take only seconds for the point of light to move away. A computerized telescope makes it vastly more comfortable to look at distant objects. The computer can follow planets, stars, comets, and galaxies easily as long as it has enough data to track them.

How does telescope gps work

With a global positioning system, a GoTo telescope will know precisely where it is on earth. It will also be aware of the time and date without you having to enter this information. However, you will still have to set a reference point manually. Even with newer technology, you will always have to position the telescope yourself to get a precise enough view to see distant objects.

How many objects can a modern telescope track?

A GoTo telescope has a database of anywhere from thousands to tens of thousands of celestial objects. It might be able to track 4,000, or 14,000, or 40,000 objects depending on the brand you purchase. Tens of thousands of objects is the usual standard. You may be able to see many other objects that the computer cannot recognize or track.

Things to consider when buying a telescope

As well as looking for GPS technology and a database with tens of thousands of objects, you should also look for a telescope that provides image clarity. Without excellent image clarity, you will not be able to see much detail in the moon or planets.

What matters is a telescope's aperture or the size of its primary lens. While a telescope with a small lens can still have high magnification, it will not gather enough light for there to be much detail. An observatory lens is enormous because it must gather as much light as possible. Always choose telescopes by their aperture and not by their magnification. Magnification is not very relevant; you will not find a telescope that has a low magnification but a high aperture.

How much do computerized telescopes cost? Are the more expensive ones significantly better?

GoTo telescopes are relatively expensive and can cost a few thousand dollars. For this reason, analog telescopes remain in use because they are less expensive. The price depends partly on the durability of the construction. An all-metal telescope is likely to last longer than one with a lot of plastic in the structure.

The strength of the mount also matters. A cheaper telescope may have a wobbly mount, which can be blown around by the wind. Therefore, you might not want to go with the least expensive telescope you can find. Look around for a telescope with a sturdy mount that will not move against your intention.

The size of the database also affects the price. A higher-end telescope will contain a database with tens of thousands rather than thousands of objects.

Can you hook a telescope up to a PC?

With a non-computerized telescope, a distant object will move too quickly for you to be able to take a picture of it. With GoTo telescopes, the telescope will follow the object at precisely the right speed and keep it in view. You can then use a camera to take a picture of it. Images of distant stars and galaxies are often beautiful and detailed even with home equipment. These pictures resemble the images taken by professional astronomers. You won't be able to see nearly as far as professional astronomers do, but you can still create images that are just as striking.

A telescope does not usually come with any astrophotography equipment, not even if it is a higher-end model. If you attach an ordinary film or digital camera to your telescope, you may have to modify it. This modification is not a hugely difficult task, but there is some skill involved. You might be better off purchasing a camera that is specifically for astrophotography with a GoTo telescope.

Are there any advantages to non-GoTo telescopes?

Manual telescopes do have one advantage, and that is that they tend to have more power. If you want a great deal of power for a reasonable price, you might choose to go with a non-GoTo telescope. Telescopes that are both powerful and GoTo may go beyond what you can afford. Therefore, there is still a market for manual telescopes.

While motorized tracking of distant objects is possible without a computerized telescope, it is much harder to do. It is also much harder to find what you are looking for with an analog telescope. If you want to learn astronomy without a computerized telescope, it is going to take you a lot longer. GoTo telescopes are a better idea if you want to become a competent amateur astronomer quickly.

Some people might also prefer non-GoTo telescopes because they are more fun to use. This is similar to preferring to drive a car with a manual gear shift. Some but not most amateur astronomers find manually searching for stars to be an enjoyable experience.