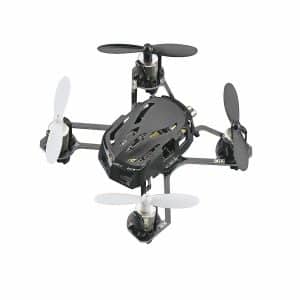 Micro quadcopters are designed to fly indoors as much as outside. They are perfect for the beginner that are just getting into flying drones.

Even though they are aimed at the beginner pilot, they can still perform well and some can perform advanced manoeuvres.

As there are so many micro quadcopters to choose from. There are also many different manufacturers. As a result, I thought it would be useful to go through the top 10 mini quadcopters that are currently on the market.

First up is the holystone predator small quadcopter. We have featured holystone before in our other reviews, and it always does well.

One of the features of the holystone is that it's a great micro copter for both the beginner and intermediate flyer. With the headless flight system, it makes it a lot easier to fly and not get disorientated. This is because the stick direction is the direction the drone flies rather than which way the drone is facing.

It features a six-axis gyro stabilizer which makes it easier to recover after some stunts or sudden moves. Flying time is between 6 to 8 minutes with the charging time between 60 and 80 minutes.
This small quad is suitable for pilots aged 14 and above. So its a great first quad for new pilots out there.
With over 2,500 reviews with the star rating of 4 1/2. Direct from atomic RC the hand-sized Hubson X4 small quadcopter features a precision six axis gyro with the great stability it's ready to fly straight out the box. It is recommended that you have some spare batteries on hand because the flight time is about 5 to 8 minutes. It features universal USB connector to charge it.

This micro quad copter is fast and extremely nimble and also easy to fly. It features a durable one-piece mainframe which can withstand the usual bumps and scrapes along the way.
Highly recommended for the novice pilot and cheap enough that it won't break the bank! The onecase cheerson small quadcopter features Wi-Fi remote control FPV real-time video by connecting to your smartphone. This great feature allows you to record and store the recorded pictures and video straight to the phone's memory card.

The cheerson is controlled with your smartphone as it doesn't come with a controller. However, the controls are very intuitive. It also features a six-axis gyro which gives it great stability. It's got 0.3 megapixel HD camera which is great to be able to view in real time.

Charging time is about 30 minutes with flying time about four minutes. The remote control distance is 25 metres so a great little micro drone to fly in the garden and also indoors. With the added option of using a 2.gGHz transmitter to control the drone for further distances, these are the known transmitters it binds to CX-10, CX-10A, CX-10C, CX-STARS. The Syma X11 is a great indoor and outdoor micro copter. It features a 6 Axis stabilization system for nice smooth controlled flight. This quadcopter does come with a 2.4GHz spectrum technology controller and also 4 spare propellers for when we have the odd whoopsie!

Flying time is between 5-7 minutes with the charging time of roughly 40 minutes which isn't too bad, and if you add some spare batteries, you could almost have continuous flying time.
With over 1000 4star reviews this small quadcopter is well worth considering. The Realacc nano quadcopter drone is RTF straight out the box and features an FPV Wi-Fi that controls to your smartphone. This drone also has the great feature of altitude hold so you can get some great shots while not having to worry about controlled and altitude. Again it features a gyro six axis which is perfect for great stability.

The Wi-Fi distance is about 20 to 40 m. Flying time is a stated four minutes with charging time about 30 minutes, so well worth having a few spare batteries to hand. Another great feature is a one-touch landing option and also one key return to base function. The controller/ docking station is a great unique feature for transportation and the cover also doubles up as the phone holder.
It comes with four spare blades and USB charging cable. and with a good 4 out of a 5-star rating. The EACHINE is extremely small however it packs some great features considering its size. With a 2MP camera that also does 720HD video. It comes with a 6 axis gyro that can be adjusted for sensitivity. Flying time is between 5 to 6 minutes and a charging time of 35 minutes.
The EACHINE can do 360-degree rolling maneuvers so a great nano drone to try some 3-D stunts. Also with the cool looking LED lights you can try the night time flying. With an average of 4 1/2 stars, the E10C mini quadcopter is well worth taking a look at. This is another micro nano quadcopter from EACHINE, however, this one is a little bit more advanced. This is because it is a racing quadcopter and is extremely powerful for it's size. The QX95 features FPV and is built using carbon fibre materials which makes it extremely strong and very light. It only weighs 40g without the battery.
This model the BNF version does come with a receiver, however (flysky)so need you however you will need a transmitter. The VR D2 goggles are a good recommendation.
This is a great looking raw drone with all the elements exposed, so I wouldn't recommend flying this in light rain!

The Inguity Max Speed micro stunt boasts flight capabilities that it claims are unmatched by other drones, with the ability to bank tighter turns and accelerate up to a 150ft high, along with tilt at 45 degrees you can really pick up a lot of forward speed. You have the option of having it on low sensitivity if you're a beginner and then as you get used to it you can turn up the sensitivity to try out some more advanced maneuvers, like yaw rolls and 3D flips!
Charging time is a claimed 45 minutes flying time is up to 8 minutes depending on how much power you use! With the added benefit of a removable battery, it's always good to have a few spare to extend air time! The protoX claims to be the original nano quadcopter. With its tiny size and only weighing just over 11gs, this is the great little quadcopter to be messing about with inside, with its four little micro motors.
It features a six-axis gyro with a system they call the "auto upright system". This self-corrects even after a bad launch!
With the built-in LEDs makes it a good little drone to fly at night also.
With almost 1500 4 1/2 star reviews this little multi-rotor quadcopter packs a big punch and is well worth checking out.

The small Nano QX quadcopter has some great features which are fantastic for the first time pilot with their safe technology system disallows the quadcopter to go back to a safe controlled hover if you get into trouble. Once you have mastered the quadcopter you can turn the system off and enjoy some advanced flying.
The Nano QX only weighs just over 14 g so great little drone to fly inside and outside when it's not so windy.
Flight time is about seven minutes and between 30 to 40 minutes charging time, so well worth having a few spare batteries to enjoy some extended flying time.

Can a drone be as small as possible?

Some drones can be as small as 1.5 to 2 inches wide, and some of these are also available commercially as Nano drones.

When it comes to drones, how small can they get?

Commercially, the smallest drone available is the Cheerson CX10, measuring 1.57 inches wide and 0.79 inches tall. This drone is listed above.

What is the cost of a micro drone?

Some of the cheapest micro drones can be found for under $20. They are also some of the smallest drones you can buy.

Nano drones: what are they?

Nano drones are smaller than micro drones, fitting in the category of under 3 inches, making them the smallest drone category.

A cheap micro drone is the best choice if you want to use it to fly around the house or to use it as a camera.

Two of these cheap ones are better than paying more for a single one that crashes. A cheaper drone also has a tendency to be more durable and less complex, containing fewer working parts.

Due to the very small size of these drones, they are not brushless drones. If you need one with brushless technology, you will have to opt for a mini drone or one with GPS capability.

Check out our professional drones review if you were thinking of going a bit more advanced!