Result: The Ruko U11 Pro is a camera drone for less than 300, – Euro and therefore well suited for beginners and beginners. However, the drone lacks a 3-axis gimbal and is quite heavy at over 250 grams – for example, the DJI Mini SE would be a better alternative to a similar price.

The Ruko U11 Pro Drone is a cheap one on Amazon  Drone with 4K Camera for Adults,52 Min Flight Time, 5G FPV GPS Drone for Beginners with Live Video, Brushless Motor, Auto Return, Follow Me, Circle Fly, RC Quadcopter with 2 Batteries[/easyazon_link]. The manufacturer promises not only a 4K camera for crystal clear images but also 46 minutes of flight time, return function or intelligent recording, and flight modes such as Point of Interest or TapFly. We have Ruko U11 Pro Drone a little research and clarify in the report whether a purchase of the 4K drone is worthwhile.

Ruko U11 Pro: and accessories

The Ruko U11 Pro conveniently includes a hard-shell suitcase in which not only the drone itself but also the supplied accessories are stored. The Ruko U11 Pro Drone includes all kinds of documents (e.B operating instructions or user manual in German, quick start guide as well as disclaimer and safety guidelines), screwdrivers and screws for replacing the propellers, two USB-C charging cables, a set of spare propellers, smartphone holder, two 7.6V batteries with 1,900 mAh capacity each, remote control with integrated battery and, of course, the aircraft itself.

Attention: The Ruko U11 Pro drone has a microSD memory slot directly in the aircraft. However, a corresponding memory card is not included and must therefore be purchased separately. The Ruko U11 Pro maximum supports microSD memory cards with a capacity of 32 gigabytes. Photos and videos can also be taken without a memory card – the recording material is then stored directly in the mobile phone or smartphone. However, the video quality is lower when using the Ruko U11 Pro without a memory card. Videos are stored in 1,280 x 720p on the smartphone and in 3,840 x 2,160p on the microSD card. Photos are backed up both on the memory card and on the smartphone in a resolution of 2,048 x 1151 pixels.

Aircraft and battery: design and functions

That Design of the Ruko U11 Pro drone differs little from the design of most camera drones. The Gehäuse of the quadrocopter is made of black and comes with foldable booms. The build quality looks mediocre and not very high-quality.  However, you can fold the drone, which simplifies transport and makes the drone ideal for on the go. The folding mechanism makes, as DJI drones are known, but a somewhat rickety and not very high-quality impression. On the Ruko U11 Pro you will not find any stylish details, but only cheap plastic.

When folded, the dimensions of the Ruko U11 Pro are included 15.01 x 10 x 6 centimeters. If you fold out the drone, the dimensions are 22.98 x 26.4 x 6 centimeters. A disadvantage of the Ruko U11 Pro drone is its Weight of 278 grams. Because this is the Drone above the 250-gram limit, liability insurance, as well as registration and marking, are not sufficient, but also a drone driver’s license for the drone is required. This should be taken into account if you want to buy a camera drone. Tip: DJI Mavic Mini, DJI Mini 2, or DJI Mini SE is lighter than 250 grams – with these drones, a drone driver’s license according to the applicable EU drone regulation is therefore not absolutely necessary.

By the Battery of the drone is an intelligent Lithium polymer battery (7.6V) with a Capacity of 1,900 mAh. A battery with a capacity of 1,200 mAh is also integrated into the remote control. To charge the battery and remote control, the supplied USB-C cable was used. However, a USB power supply is not included – however, both battery and remote control can be supplied with fresh juice at any conventional USB output, such as on the PC or by means of a power bank. A separate power supply for the socket is therefore not necessary, which makes charging on a trip or on the go particularly practical.

Both battery and drone have Status LEDs. While charging, the battery LEDs flash. When the battery is fully charged, the LEDs light up permanently. So you know quickly when the battery is ready for use again. The drone itself also has LEDs – for example on the back or on the booms. The LEDs on the aircraft not only information about the status of the drone (e.B. a stable and successful GPS signal), but also act as position lights for better recognizability of the remote-controlled RC quadrocopter. In Manual of Ruko U11 Pro there are corresponding explanations to be able to understand the status of the LEDs: 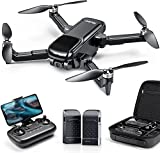 The Remote control of the Ruko U11 Pro is functionally designed and gives a rather inferior impression due to the very low weight. Nevertheless, the remote control fits well in the hand and the smartphone holder positioned at the top ensures a good readability of the app. The antennas of the remote control are foldable or foldable, so that easy transport is possible. Too bad: The joysticks of the remote control can not be removed for a more comfortable transport – this is now standard at DJI and should also be possible with drone models from other manufacturers. 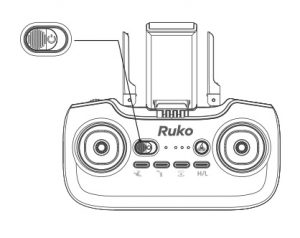 Otherwise, the remote control offers the usual functions and features. Apart from the joysticks, you will find an On and off switch as well as a Return To Home button. In addition, there are some function keys – for example, to turn the GPS on and off, to activate Follow Me and Point of Interest, or a button to adjust the airspeed. By default, the GPS of the Ruko U11 Pro is always activated. If you press the GPS button long, you can deactivate the GPS. By default, the medium speed mode is also set. If you press the Speed button once, the high airspeed is activated. On the other hand, if you press the speed switch twice, the low-speed level of the Ruko U11 Pro is activated. Of course, the remote control also comes with controls for controlling the camera. This can be adjusted in the range of -90° to 0°. To adjust the camera angle, the dial acts in the right shoulder area, while in the left shoulder area there are two buttons for the trigger of the photo function and a button for recording videos.

The Photo and video quality of the Ruko U11 Pro is rather mediocre and hardly tears the user off the stool. Sometimes the photos and videos of the drone give a somewhat oversharpened and oversaturated impression.

In view of the low acquisition costs, the image results are of course sufficient for the normal user and one or the other everyday shots – but you should not expect too much from the camera drone in terms of photo and video quality. This is also due to the fact that the Ruko U11 Pro is a controllable camera with pan function, but not via a 3-axis gimbal. Videos are thus not stabilized, which is an absolute disadvantage compared to DJI camera drones. A disadvantage is also the range, which is sufficient with specified 500 meters, but compared to the DJI OcuSync 2.0 with the DJI Mini 2 or the extended WiFi with the DJI Mini SE is much more susceptible to interference and is also associated with a high delay time. And also the transmission of the live image is a bit smoother with DJI with 720p and 30 fps compared to the Ruko U11 Pro with 720p and 25 fps and therefore higher quality.

To make the Ruko U11 Pro easy and stable to control, it has an integrated GPS and Glonass module. Thus, the drone can independently maintain not only it’s vertical but also its horizontal position. However, floating sensors, such as those installed in the DJI Mini 2, DJI Mini SE, or the Autel EVO Nano, are not found in the Ruko U11 Pro. Caution should therefore be exercised when the GPS signal is switched off or when the GPS signal is weak. Thanks to GPS and integrated altimeter, the Ruko drone can also be taken off and landed automatically. There are corresponding buttons in the app for this.

In terms of flight modes, the Ruko U11 Pro offers functions such as the automatic return (RTH), Point of Interest, Follow Me, or Waypoints. With Smart RTH or Return to Home, the Ruko U11 Pro supports automatic return. As soon as you activate the return function, the drone automatically flies back to the start or departure point thanks to the GPS positioning system. In addition to returning at the push of a button, the Ruko U11 Pro also supports automatic return flight when the charge or battery level is low. The flight altitude on return is 20 meters by default and can be increased in the settings of the “Ruko GPS” app if necessary. In addition, you can – with activated beginner mode – but also the Maximum flight distance or the Maximum altitude limit. This is a worthwhile feature for beginners to slowly get to know the flight characteristics of the camera drone.

As already described, the Ruko U11 Pro is also a Follow Me Mode. However, this is a “simple” Follow Me. This means that the camera drone cannot follow a person or an object with the help of visual tracking, but only the remote control or .dem smartphone. This is possible by allowing the drone to follow the location of the mobile phone via GPS and thus locate the user’s location. In addition, to Follow Me, there is also a waypoint mode in the app. With the Waypoint Mode, the drone can automatically fly planned waypoints – a total of up to 21 waypoints are possible. A cool feature is also a point of interest or the POI mode so that the Ruko U11 Pro can film a stationary object within a circle, which is particularly suitable for cinematographic videos. The user can manually adjust both the radius and the airspeed.

At first glance, the Ruko U11 Pro makes a good impression – especially the low price of less than 300, – Euro speaks for the inexpensive Camera drone with 4K video resolution.

The drone even comes with GPS, RTH, or Follow Me function and is therefore well suited for beginners and beginners. It is also commendable that two batteries, as well as a carrying bag or a transport case, are included as standard with the Ruko U11 Pro drone. But if you look at the DJI Mini SE for a similar price or the DJI Mini 2 for a slightly higher price, for example, the choice should clearly fall on the two models of the brand manufacturer.

Thus, the DJI Mini SE moves in a similar price region and although it cannot record videos in 4K resolution, it offers due to the 3-axis gimbals a significantly better recording quality. In addition, the DJI drones are not only better processed, but also come with more stable signal transmission, offer a higher flight time, and can also be controlled with the extremely sophisticated DJI Fly app. Another, particularly important Advantage of DJI mini drones: They are less than 249 Gramm easy so a drone driver’s license is not absolutely necessary. With the Ruko U11 Pro, however, the weight is above the 250-gram limit, so at least the (small) EU drone driver’s license is usually required.